The dream that Nuevo Leon, the estate of Mexico where I was raised, could become a wine region was just imaginable. Nuevo Leon is characterized by being a warm almost hot dry dessert area. They are well known as a beer producer state. Heineken mexican headquarters and production center are located in Nuevo Leon. Heineken recently acquired a brewery formerly known as Cerverceria Cuahutemoc Moctezuma. Heineken is know producer of Carta Blanca and Tecate beer among others. Nuevo Leon is also known for being the North East Region producer of citrus fruits. In Nuevo Leon, the production of orange and mandarins are well known by Mexicans. In spanish we call it la región citrícola de Mexico.  Hence, just the thought of producing wine in this arid and challenging terroir indeed was just inimaginable.

I recently came acquaintance with the agricultural eningeer Jaime Cavazos who is running a grape growing pilot program at the Department of agriculture of UANL, University of Nuevo Leon by its initials in Spanish. They are studying the possibility of growing grapes -and make Nuevo Leon a wine region, maybe?- what they call Cultivos Alternativos. The department that was leaded by Cavazos, wanted to provide an alternative  for the local farmers that usually grow just oranges . The Region Citricola encompasses 282 km from Santiago, Nuevo Leon to Linares. As stated previously is a challenging area climate wise. For your refference, Nuevo Leon is located the north east part of Mexico that adjoins with Texas the South Border. Since a couple of years ago they have been growing Chenin Blanc, Chardonnay, Merlot, Malbec, Shiraz and Cabernet Sauvignon.

I wish I could had visit the three and a half hectares that have grown in Linares, Nuevo Leon. However, I haven’t had the opportunity to visit because of the pandemic we haven’t been able to travel overseas. Thankfully, I have great friends in great places. My long time friend and now blog collaborator Daniela Gutierrez had a chance to travel to Linares, Nuevo Leon and took some amazing pictures of the vines. I can not wait two hear more from her about her experience traveling to Linares where these vines are growing. Stay tuned for her upcoming post in Memoria Sensorial.

This site uses Akismet to reduce spam. Learn how your comment data is processed.

Made with love in New York 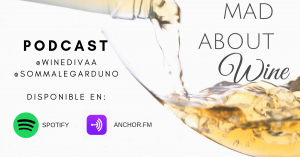 This Divaa have been on a roll! - Wednesday I was

“Not all girls are made of sugar, spice and ever

From my kitchen to the Mediterranean Sea on a sip

Having so much fun with #roséweek Have spoken muc

On the 3rd day of #roséweek get the Saget La Per

I look after the new vintage release of a couple o